Halloween for many children is such an exciting time of year. Of course they love the sweets and chocolates, but children also love the pumpkin carving, the fun of trick or treating in the dark, and to play being pretend-scared. When this is all done with fun and whilst feeling safe, they scream with delight! But what happens when your child is waking up screaming overnight? Not so much fun, for either you or them.

Parents often ask me when their child is waking overnight if it is a nightmare or a night terror. Often it’s neither; it’s simply a sleep association, separation anxiety or possibly an environmental factor causing them to stir. If you don’t know what you’re looking for, it can be really tricky to decipher why your child is waking, making it even tougher to know what to do about it.

As a child’s brain develops, so does the ability to imagine. Children from around the age of two enter into the pre-operational stage of development which gives rise to abstract thought, the ability to experience bad dreams and have fears and anxieties about things they have seen or heard.

Older children from around the age of 7 start to have more logical thought processes and are far more likely to be afraid of real-life events such as fires.

So what about babies, can they experience nightmares, terrors and fears? In short, no. Babies under the age of 2 don’t have the capability to develop fears because their brains simply aren’t wired that way just yet.

How can you tell the difference between nightmares and night terrors?

Although often confused, nightmares and night terrors are quite distinct in why they occur, when they happen and the outward symptoms you observe in a child. Knowing how to distinguish between can help you to work how to help support your child. Here are the main differences to look out for: 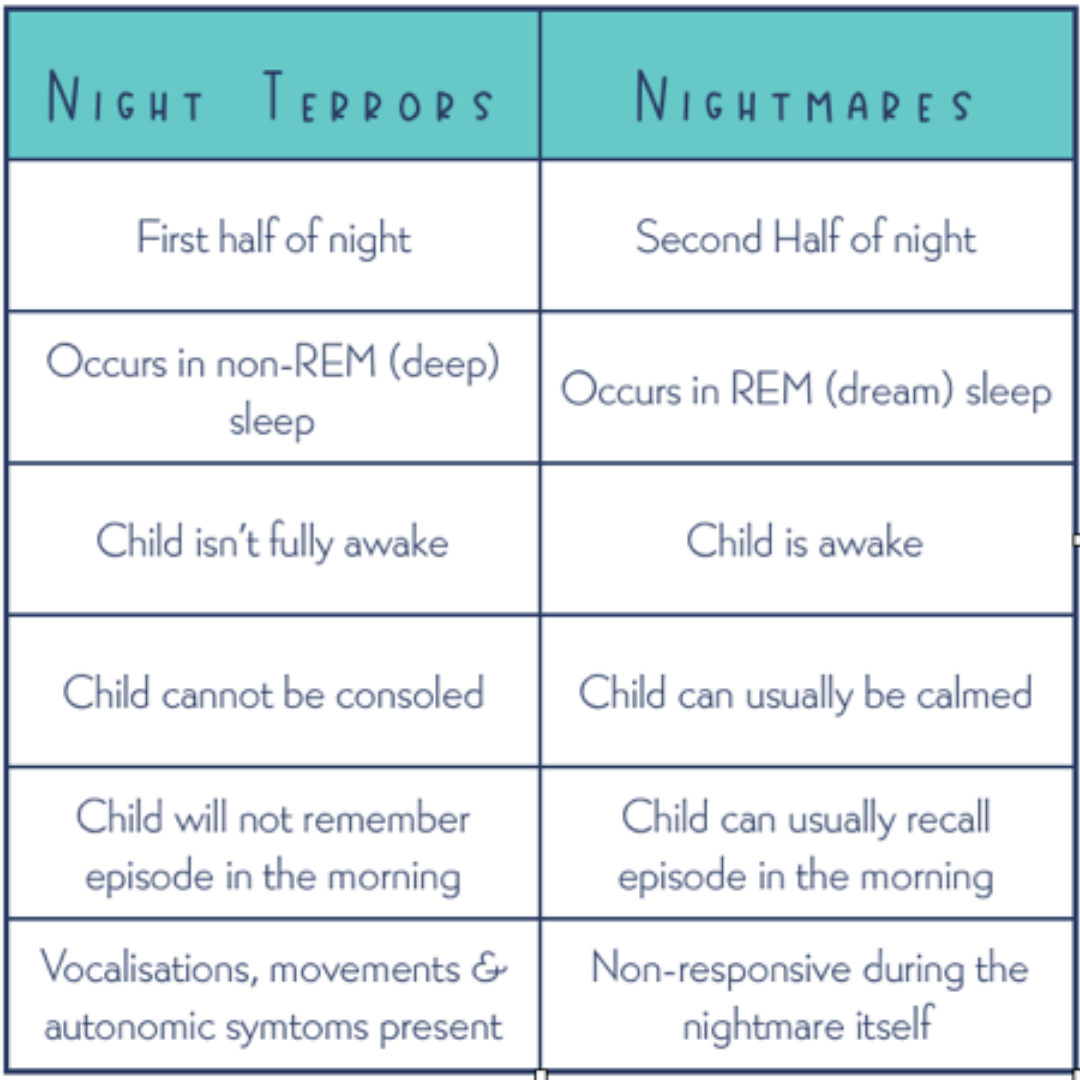 You can see from the table above that nightmares are likely to occur during a state of sleep called Rapid Eye Movement (REM) sleep which predominantly occurs in the second half of the night. Around half of all children between 3 and 6 years will experience nightmares on a regular basis.

Tips for coping with nightmares

Calm your child down – some may just need a hand on their back with soft words, others will need to be picked and given cuddles.

Reassure them – place your child back into their sleep environment, reminding them that you are there, everything is ok and the same as it was at bedtime for example pointing out their favourite soft toys.

Respond with positivity, understanding and love – if they are convinced it was real, just listen to their story rather than correcting them. Most adults, because we have access to logical thought, react by telling them that their fears aren’t real. This statement will go right over a young child’s head, so instead empathise with their feelings and reassure them in physical ways instead.

Store kisses for later – give their comforter/soft toy extra kisses at bedtime so that they can access them during the night.

Prevention is easier than cure – keep an eye on their media intake. Nightmares occur once your child develops an imagination, but they use what they see as a source of information to expand this internal mental imagery.

Try using a dream catcher – young children love to have physical symbolism to help work through their thoughts and feelings. It can also help as a discussion point in the morning so you can talk through any good and bad dreams.

Teach them to change their mental channel – tell them that by flipping over to their other side can ‘change the channel’ on the bad dream. You can help during the day by getting them to lay with their eyes closed and imagining good stories to use at night when they need to change channel.

Play with the concept of dark and light – help your child feel comfortable in their room by introducing a night light if they don’t already. Play with torches, discuss shadows and what happens when it goes from light to dark.

Don’t forget the monster spray! – indulge in fear rather than dismissing it by asking them to describe what the monster looks like and draw pictures during the day. Make monster spray with some water, lavender essential drops and food colouring/glitter. Get them to spray at bedtime to help keep the monsters away.

Keep to their routine – try to return to your bed after your child is calm before they are back to sleep so that repeated episodes are less likely, and both yours and their sleep is less disrupted on subsequent nights.

Night terrors on the other hand are a very different phenomenon. Although they peak in a similar age group, they only affect around a third of children. They are caused by over-arousal of the Central Nervous System.

Tips for coping with night terrors

Try to resist waking them up as (even if you manage to), it’s likely to make your child disoriented and they won’t understand why they are out of bed.

Keep them safe – instead of waking them,  stay calm and sit by their side until it passes to make sure they are safe.

Try not to worry – night terrors will pass with time as the brain matures.

They are linked to sleep apnea so if they occur frequently, it’s worth mentioning to the GP.

Although night terrors can occur regularly in some children regardless, they can be worsened or start happening for children who don’t usually experience them by the following triggers:

If you’re struggling with your little one’s nightmares and need some help figuring out how to move forward, get in touch for a free 15 minute assessment call to see how we can help. You can also check out the new FREE RESOURCES page for our downloadable guides.

Blogged by Emma, owner of HushaBoo and Mum to Davey, who is afraid of the dark, just like his Mum used to be! Follow me below for more blogs, updates and advice on all things sleep and parenting.